I apologize for posting this ‘Dancing with the Stars’ costume critique late this week!... OK, not really…as I was enjoying a Danube River cruise, and we had just visited Vienna on Mother’s Day.

I was just able to watch a recorded DWTS, early this morning after returning last evening from Budapest. I was thrilled to hear that Vienna was mentioned, when Normani and Val started off this week’s show with their Viennese Waltz! I watched their presentation with a big smile on my face, both because of remembering my short time in Vienna, but also because both Normani and Val were exquisitely dressed. I loved Normani’s costume with lusciously draped, bias-cut, red satin skirt along with her elegantly rhinestoned lace halter necklined bodice. The ‘nude’ mesh of her bodice created a modestly cut costume which matched her skin tone exactly. The heaviness of her satin skirt (with side-slit) created beautiful movement when she danced. Val coordinated handsomely with his black ensemble with deep red necktie, armbands and vest back. The couple was tailored to perfection!

David and Lindsay then danced a Fox Trot, also in exquisite costumes. David was debonair in his traditional black and white tuxedo costume with a touch of subtle rhinestone accents. He was adorable as ‘every man’ in his top hat and tails. Lindsay was also adorable in her elegant coral chiffon gown with her low hipline zig-zagged bodice seaming. She was sophisticated with her stunning necklace and fingerless opera glove accessories. Bravo for her real straps and darker rhinestones accented her gown’s neckline to frame her front bodice.

I admit to fast-forwarding through commercials, but I stopped to again, enjoy (I have seen it before) the Swiffer commercial that featured a janitor on the set of DWTS. I LOVE his rhinestone accented work togs, how about you?

Simone and Sasha danced a dynamite Jive with what I would call ‘glittery street apparel’ for Simone and ‘decorated street apparel’ for Sasha. Simone’s bejeweled bra top with larger gems to break up the silver, also featured real rhinestoned straps. Her (possibly) leather jeans were accented with 4 zippers and created a ‘cute as a button’ look for our little pixie. Sasha wore black ripped jeans, white T-shirt and a black baseball jacket with some black rhinestones and decorative embroidered appliques as accents. Their outfits were not ‘costumey’, and very suitable for their routine.

Rashad and Emma closed out the ‘Judge’s Challenge Round’ with their romantic Rumba. Rashad wore simple classic and tailored togs, with his sheer, woven white chiffon shirt and basic trousers. Emma wore a matching white chiffon draped costume over a silver rhinestoned leotard. It was generally pleasing to my sensibilities except for the ‘end-at-a-weird-spot, bra – attaching to nude elastic’ design that I hate, and her wide, white belt, drawing attention where it wasn’t necessary to emphasize – in fact it broke up the design lines of her costume. Positives? -Her chiffon drape worked nicely and emphasized the dance.

Cheryl Burke (a celebrated former ‘pro’ who I always enjoyed) joined the show to promote her upcoming dance production with a dramatic presentation. I was struck with her perfect, visual use of diagonal shapes and lines with her costume and the costumes of her backup dancers.

For the second half of the show, Normani and Val danced a Jazz routine after we found out that her Grandma had created all of Normani’s dance costumes when Normani was young. Grandma was given a tour of the costume department, and I am so jealous! I enjoyed Val’s purple and black checked 3-piece suit more than I enjoyed Normani’s purple fringed costume for their Jazz number, I admit. Their costumes were historical/theatrical more than cliché dance costumes, with an homage to the 1920’s Jazz era. I did not enjoy the puckered zipper on the back of Norman’s costume. It showed a different color of purple and the back neckline sagged down and created a rumpled, puckered center back zipper. I think Grandma would have done a better job! The solution? Either eliminate the zipper, or use sheer mesh on the upper back neckline, or reshape the back bodice so it doesn’t sag.

David and Lindsay danced a Tango, with David in a boring, basic deep blue suit. I absolutely hated Lindsay’s blue velvet costume. At first glance, the costume was accented with cheap, wide sequined trim. With close-ups, I saw that the black trim was actually lace with some rhinestones. It is really important for the close-up AND ‘performance distance’ views of a costume. Many times design features should be changed, based on how they appear from a distance. Her costume also didn’t fit tightly and it didn’t lay totally smooth, causing it to look ill-fitting and very frumpy. It was a very disappointing costume. (I’m thinking Normani’s Grandma would have not approved, either!)

The vignettes performed by the Troupe to break up the show are always fun to watch. This season’s overly used design feature is the V to the waist from the shoulders detail that was used during the vignette presented at this section of the show, this week, and was used on Normani’s red opening costume and again on Emma’s final costume.

Simone and Sasha danced the Rumba with Simone in a gold bejeweled leotard and golden sash/drape. The costume fit her well, both literally and figuratively. The French-cut leotard legs added length to her powerful legs and the requisite Rumba sash/drape didn’t overpower her petite body. I loved her look! I was underwhelmed with Sasha’s simple shirt and basic trousers. The metallic thread stripes in his sheer shirt were the only interesting features of his outfit.

Rashad and Emma then performed a Quick Step with Rashad in a flashy bright blue brocade, sport coat with basic black trousers, white shirt and black bow tie. Black rhinestones adorned his lapels, bow tie and side stripes on his trousers, creating a dapper design. I didn’t delight in Emma’s costume which featured the aforementioned V design detail and then 4 layers of matching blue brocade satin ruffles. 4 layers of ruffles creates a heavy looking costume (besides actually being heavy) and her costume was pretty ho-hum and not very classy or sophisticated. It appeared that the costume department lost its creativity by the time this costume was created. I also didn’t like the necklace accessory detail.

I am very much looking forwards to next week ‘Dancing with the Stars’ Finale even though the routines generally outshine the costuming. After all, I do really LOVE watching the dancing besides the costuming! 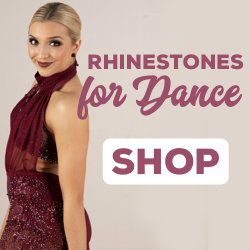